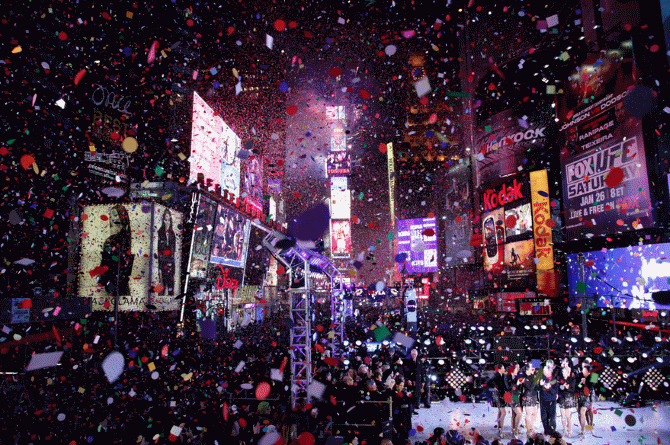 Located on the roof of One Times Square, the ball is a prominent part of a New Year’s Eve celebration in Times Square colloquially known as the ball drop, where the ball descends 141 feet (43 m) in 60 seconds down a specially designed flagpole, beginning at 11:59 p.m. ET, and resting at midnight to signal the start of the new year.

The event was first organized by Adolph Ochs, owner of The New York Times newspaper, as a successor to a series of New Year’s Eve fireworks displays he held at the building to promote its status as the new headquarters of the Times, while the ball itself was designed by Artkraft Strauss. First held on December 31, 1907, to welcome 1908, the ball drop has been held annually since, except in 1942 and 1943 in observance of wartime blackouts. The ball’s design has also been updated over the years to reflect improvements in lighting technology; the original design was made from wood and iron and lit with 100 incandescent light bulbs, while its current incarnation features a computerized LED lighting system and an outer surface consisting of triangle-shaped crystal panels. As of 2009, the ball is also displayed atop One Times Square year-round. The event is organized by the Times Square Alliance and Countdown Entertainment, a company led by Jeff Strauss.

The Times Square ball drop is one of the best-known New Year’s celebrations internationally. It is attended by at least 1 million spectators yearly and enjoys a national television audience across New Year’s Eve specials on several of the United States’ major broadcast television networks, along with coverage on several major cable networks. Around a billion people worldwide watch this event on television and over the Internet.

The prevalence of the Times Square ball drop has also inspired similar “drops” at local New Year’s Eve events across the country, often substituting balls for other objects that represent local history or culture.

Guests are invited for a night filled with cocktails and decadent foods, perfectly coordinated to ensure a memorable experience! Live music sets the mood, as celebration flows between our unique dining rooms, allowing for a spectacular evening. As the clock nears midnight, attendees will be escorted directly to a private viewing area in the center of Times Square. After the ball drop, festivities to celebrate the New Year continue.

The Gala at the Hard Rock Café Times Square NYE Party
The Gala at the Hard Rock Café is an annual party produced by the Times Square Alliance exclusively for sponsors, celebrities, and city dignitaries. The Gala is fully catered with top shelf open bar service and will feature live musical performances after midnight (last year’s performers were Carly Rae Jespen and Train).  In addition, on December 30, guests will have the opportunity to visit the actual New Year’s Eve Ball atop One Times Square and pose for photos, etc.
Celebrate the most exciting day of the Year in VIP Style with this amazing package! Enjoy 2 exclusive passes to be a part of the festivities of New Year’s in Times Square in New York City on December 31, 2017.
Your tickets allow you to attend a VIP cocktail party thrown by the Times Square Alliance, co-producers of New Year’s Eve in Times Square. This package includes full buffet dinner & full bar, DJ and a reserved viewing area on Times Square outside of The Hard Rock Cafe. You can party outside and then come inside for cocktails to get warm!

Revered globally as THE North American New Year’s Eve celebration, the Times Square ball drop is something to witness in person. Millionaire Concierge has your VIP access to the hottest New Year’s Eve bash. Bring in the upcoming year in style and luxury. This star studded event is an A lister’s dream and with our help, you too will be front and center as the count down begins.

The ball drop is one of the best-known New Year’s celebrations internationally, attended by at least 1 million spectators yearly, with an estimated global audience of at least 1 billion. A celebration that has been going strong since 1904.

Not only can we get you there, we can also provide VIP access, luxury transportation, a five-star dining experience and anything your heart may desire. What more can we say? Usher in the New Year like the stars do. Contact us today for more information.